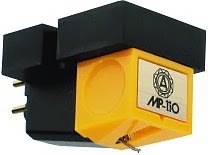 Since my Audio Technica AT95E phono cartridge mysteriously suffered a cantilever bend, and, even after adjusting for this minor metal tweak, began to suffer from bothersome inner-groove distortion, I thought it was time for something new.  With the B&W speakers and the very nice (for the price) performance of the Nakamichi SR-3A receiver, I wanted a decent jump up in sound quality.  In the sub-$100 category, there are several popular choices - the Ortofon OM10 and 2M Red, the Audio Technica AT-100E and AT-110E, the Shure 97xE, the Sumiko Oyster, and two Grado cartridges.

One brand, however, begin to stick out, Nagaoka.  They offer several models ranging from the $80 MP-100 to the $655 MP-500.  Since this is a budget rig, I decided on the MP-110 with its strong 5mV output, a reputation for tracking and low noise, and the replaceable stylus.  The cartridge came in a funky little UFO-shaped container along with screws and even a little screwdriver.

A quick visual inspection showed a cantilever that was mounted straight without any slop to the left or right.  Construction quality was high - it felt more substantial than the budget Audio Technica AT95E - though some threaded holes would be nice instead of juggling with tiny nuts and screws (please no sexual jokes).  Installation on my Dual CS5000 removable headshell wasn't too bad, provided my big Norgie cat stopped getting in the way.  Apparently she likes shiny things.  After that a protractor was used for alignment and digital gauge to determine the stylus force, which was set at 1.8g.

With no break-in, the sound was a little strange - diffuse and with some minor midrange suckout.  Tracking, however, was very, very good.  With some cartridges, the MFSL re-issue of Frank Sinatra - Nice 'n' Easy, the last track could start to show some serious inner-groove distortion.  Listening intently with the Nagaoka I had a hard time hearing any mistracking or added grittiness to the vocals.  Very impressive considering the low price point of this cartridge.

A few hours and many records later it was time to do some serious listening.

Listening to the re-issue of Dead Can Dance - The Serpent's Egg revealed a cartridge that sounded surprisingly refined for this price level.  The midrange was on the warm sound of neutrality and the treble was slightly forward with a bit of a metallic sheen, but the music was reproduced without any of the roughness or congestion that I normally associate with cheap cartridges.  Bass definition - at least through the small woofers of the B&W Matrix 805s - was very good.  It was also easy to pick out the different instruments in the mix.

One of my rarer records is the album Turquoise Fields from the French Coldwave act Little Nemo.  My copy isn't exactly mint and normally has some offending ticks and pops that distract from the music.  The Nagaoka MP-110, however really reduces this noise quite a bit.  I also found this to be true with my beat up Japanese copy of This Mortal Coil - It'll End In Tears.   In short, the cartridge is a godsend for vinyl collectors of obscure music who can't always find the cleanest copy.

My second system is mainly used for background - not for serious listening.  The speakers are too far apart and too close to the wall for good imaging.  The soundstaging, therefore, is not a strong point.  I can't comment too much on the Nagaoka MP-110 here, but the imaging is a bit diffuse and a little less solid than my CD player.  I am, however, too lazy to install this cartridge in my main system, replacing the Dynavector 10X5.  Maybe someday once the Dynavector needs to be re-tipped.

Nonetheless, I can highly recommend the Nagaoka MP-110 within the confines of a budget system.  That refinement I mentioned earlier gives a real "taste of the high-end".  In comparison, my memory of the Ortofon 2M Red (on a different table, mind you) was of a rougher sound.  This finesses of the MP-110, and the ability to reduce vinyl noise while tracking the inner groove makes it a budget winner.