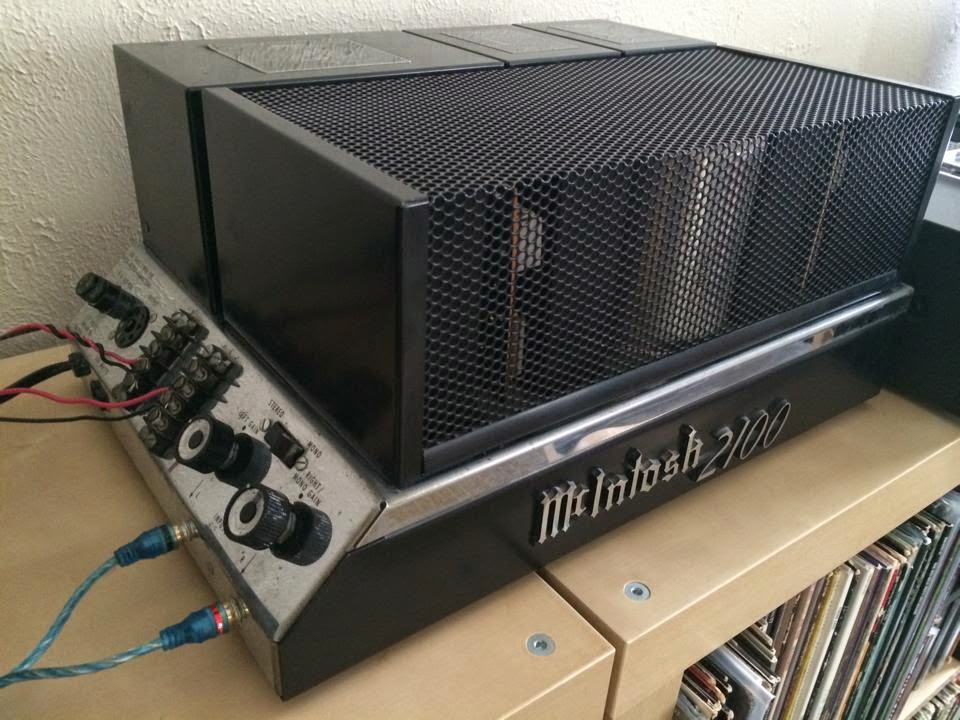 It was vintage McIntosh tube gear that launched my interest in high-end audio which is a bit funny since - and I'll be sure to get some flack for this - these older preamplifiers and amps aren't necessarily the greatest in the world.  But I will give them credit for making a piece of gear that is certainly memorable; the lit glass fronts and layouts are visually striking while the sound coming out of the speakers is warm and robust.

As I already mentioned in the previous post, I've sold off my previous system, retaining only the UREI 813A loudspeakers - for now.  Part of this was due to the location of the system - the dark basement isn't exactly my favorite place to hang out - and the realization that I was spending thousands of dollars on something that was only being used a few hours a month.  So with that in mind, I decided to simplify; concentrating on the musical aspects of reproduction instead of the ultimate fidelity.  Since the B&W 805 speakers like power I thought it best to replace the Nakimichi receiver in my upstairs system with something with a little more drive. 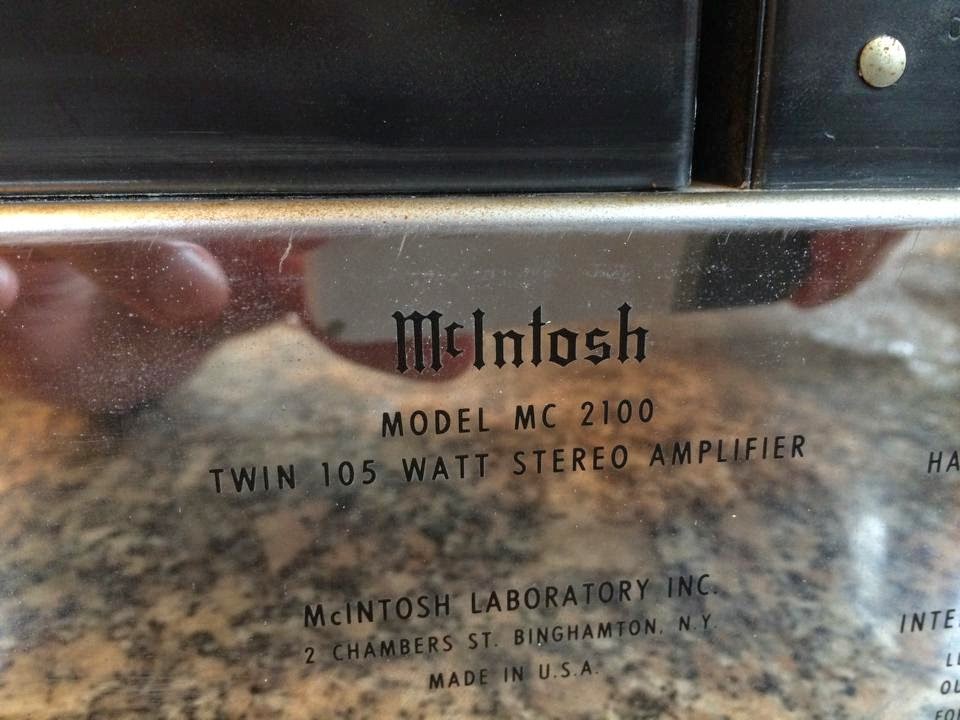 I remembered how much I liked my departed McIntosh MC-250.  I also noticed that prices are rising on these vintage amplifiers.  But my luck held out and I managed to find the 250's big brother, the heavy-duty MC2100 for only six hundred dollars.  It has twice the power and the same utilitarian (some might say industrial) look of its smaller sibling.  When funds permit, I may go for a matching McIntosh preamplifier - though of a later vintage - and tuner, but for now I've gone the budget route with a first-generation Adcom GFP-555.

The McIntosh MC2100 is rated - very conservatively - at 105WPC and features autoformers on the output.  It can, at least according to various sources, easily exceed that value.  And after hooking it up to my B&W Matrix 805 speakers, the first thing that I noticed was more bass oomph and dynamic drive.  The little 5" woofer of 805s don't exactly move a lot of air, so this was a pleasant surprise over the Nak receiver.  Perhaps it is the nature of having an autoformer on the transistor output stage, but this bass had a slight (and I mean very, very small) loosey-goosey nature.  It wasn't sloppy, but was just a touch less tight and less sterile than the Japanese receiver.  In my book that's a good thing. 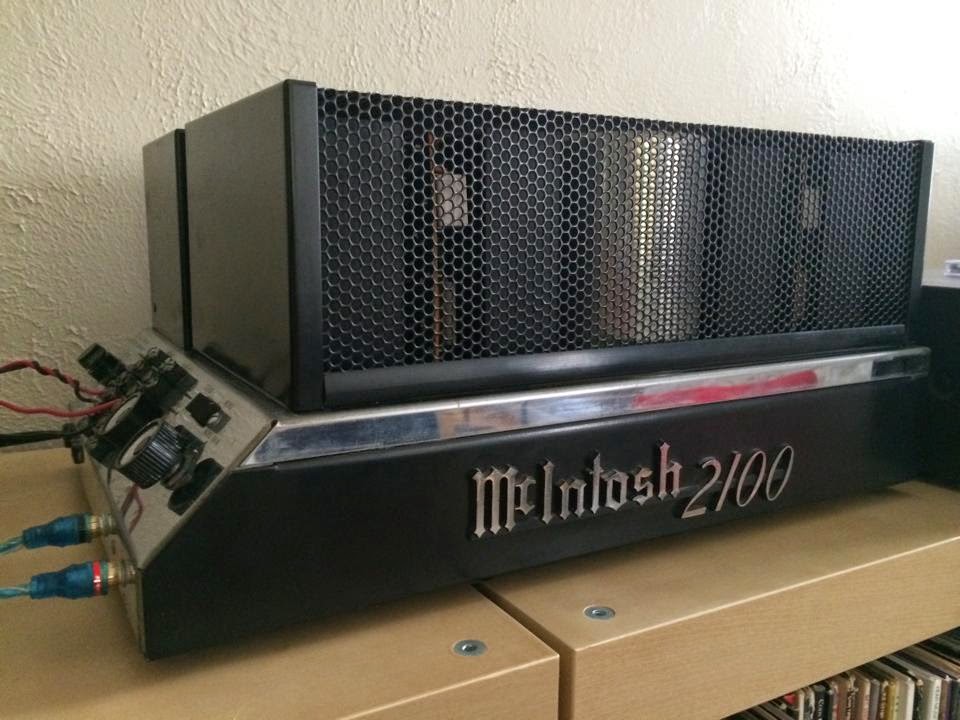 With these early SS pieced of McIntosh there have been many comparisons to tubes.  The midrange, with well-recorded pieces like Steve Forbert's Jackrabbit Slim, or Gary Numan's Splinter had a warm character, but lacked that ultimate finesse and clarity that the best tube amplifiers have.  Instead I'm vaguely reminded of the venerable B&K ST-140, which has a (non-linear?) dc-blocking electrolytic capacitor on the input stage.  It adds some "FM Radio" character that is pleasant and conducive to long-term listening but should not be mistaken for uber-fidelity.  Of course that's not what I'm striving for here so there are no disappointments in this area, but just something to be noted for any readers looking for the "ultimate" amplifier.

It is the upper-mids and treble where most solid-state amps fall on their face.  I would give the McIntosh MC2100 a high passing grade here.  It suffers from the sins of omission, clouding some detail and rolling off the treble.  Again we are talking about musicality over the ultimate extension and pin-point imaging.  A rough analog: perhaps the MC2100 is closer to a good moving magnet instead of a hyper-detailed moving-coil cartridge.  As a side note: when I had a MC250 around, I noticed some grain in the texture, but, at least with this current setup, I'm not hearing that same kind of effect 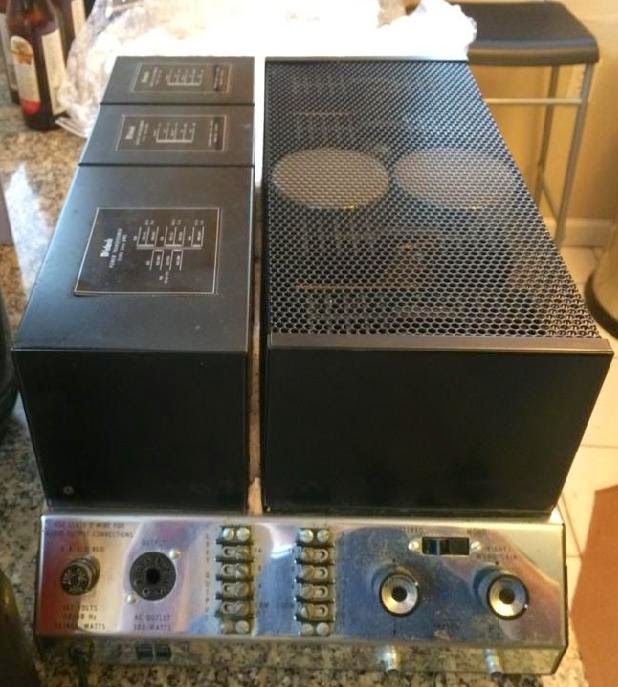 Imaging and depth are good but not superlative.  Of course some of this is the fault of my speaker setup, the limitations of the Dual CS5000 turntable and Nagaoka MP-110, and perhaps the use of an Adcom preamplifier, which isn't exactly the best in the world.  Future upgrades will give a clearer picture of the limitations of this amplifier.

At least to my ears, the McIntosh MC2100 is a fine solid-state piece of gear if - and this is an important point - one is not reaching for the ultimate fidelity, but instead prefers emotion.  It is here where this amplifier shines, being a sort of "poor man's tube amp."   No, it doesn't sound like a Dynaco 70 or even come close to my departed Eico HF-60s, but it does capture the essence of the musical performance and minimizes the worst aspects of a budget system.  So in that regard, the McIntosh MC2100 is a clear winner.