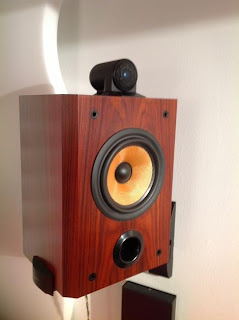 Introduction
Bowers and Wilkins have long been audiophile darlings.  I'm no historical expert, but from my many years of reading the audio specialty magazines, it is the venerable 801 studio monitor that cemented their reputation.  Unlike many other speaker makers, they also produce their own drivers, and have an engineering staff on board to build excellent crossovers and cabinets.  This attention to quality is hardly extraordinary in the world of audiophiles, but like their British competitor KEF, it speaks of a long term love of the black arts of speaker design.

My own personal experience with B&W is very, very short.  The only pair I've personally heard was back in the 80s, when my best friend had a pair of stand mounted units of an unknown model.  I don't specifically remember much about the sound other than the speakers could take all the power that the Denon receiver could dish out.  This was, of course, before my audiophile days, when playing clean and loud was all that mattered to my teenage ears.

Time for a New Speaker?
Moving to a new house with a smaller listening space, and a Denon DL-103R cartridge that got damaged during the move, tempered my audiophile equipment craving.  Instead I pulled back on my expenditures, scaling back the size and quality of my system by going with a pair of KEF iQ30 speakers that I already owned, and buying a new Denon DL-110 cartridge.  I even stuck in some Chinese EL34 tubes for my Eico HF60 monoblocks, wanting to save my vintage Mullards for the day when I had a larger listening room.

However, fate being what it is, those plans of hanging back were thwarted by the purchase of a VPI Aries 1.  This was not a turntable purchase that I was planning to make, but it was such a hard deal to pass up - being local and priced lower than what I was seeing on Audiogon - that I took the plunge.  The resulting sound, even through the budget KEF monitors, was a major eye-opener.  I'll be reviewing this turntable in a separate post, but needless to say the overall sound, even with a budget priced Denon DL-110, became much more dynamic, involving, and was quite the step up in reproduction.  After hearing the Aries, I knew that to get the full effect I had to upgrade the rest of my stereo system.  I also knew that with my smaller listening space that approaching the bass and dynamics of the UREI would be near impossible, but perhaps I could be sated with a mini-monitor of high enough quality.

My initial thought was to go with KEF - specifically the KEF LS50, but the low efficiency of 85dB made me wonder if 60Ws of tube power would be enough.  The lower-end models of KEF had their own issues.  For example I wondered if the current Q300 model would really be a major upgrade versus the iQ30s currently in the system.  Browsing through Audiogon for monitors under one thousand dollars, I came across the B&W Matrix 805s, the baby brother of the famed 801s.  My interest piqued, I read the Stereophile review and this post by Ken Rockwell.  Both are excellent starting points if you wish to have a deeper technical description of these speakers.  Needless to say, I was thoroughly interest in this speaker now.  Though the efficiency is only a rated 87dB, it still seemed worth taking the risk.  I purchased the 805s and soon had them in my hands.

Initial Impressions
Opening the box and unwrapping the yards of bubble wrap, I was greeted with a very nicely built pair of mini-monitors.  The enclosure made of rosewood (veneer?) is very lovely.  Binding posts on the rear are recessed and gold.  The woofer is a 6.5" kevlar unit while the removable bullet tweeter on top is a metal dome that is time-aligned by a fourth-order crossover.  An extra feature is the optional outboard electronic crossover/filer the cuts bass off below 10Hz but firms up the response between 10Hz and 50Hz.  This could be useful to reduce turntable subsonics and improve the low-end for rock or symphony music.

Installation was on top of my UTI 29" tall stands, bi-wired with budget Kimber 8PR/4PR.  Distance between the speakers was some 7' from each other and perhaps 2' from the sidewalls and 3' from the rear wall.  Obviously not a cavernous listening area, eh?

Using the Denon DL-110 cartridge, along with Hitachi 5AR4s and Shuguang EL34s installed in the Eico HF60s.  The first record up on the Aries 1 turntable was Neil Young's "Live at Massey Hall".  This recording is fantastic - however with only one singer and guitar (or piano) it is by no means a complex or very dynamic album.  Nonetheless, it is a good album for picking out overall sound quality.  The treble sounded very clean and polite.  The midrange was clear with plenty of detail and space.  The bass, which isn't very deep on this album, had a slightly wooden character.

The next two albums: a German pressing of Pink Floyd's "Animals" and a Japanese pressing of Steely Dan's "Greatest Hits" showed the natural limitations of all small speakers.  As expected, ultimate dynamic range and the lower bass of the B&W 805s were limited by the small woofer size.  Yes, I'm being quite unfair comparing such a minute speaker to the massive UREI 813As, but I'm just reporting what I heard.  When the bass got really deep, the 805s didn't choke, but instead began to slowly compress, leading to the already mentioned wooden character to the bass.  However, throughout the dynamic swings, the sound still remained balanced and focused without getting gritty or uncontrolled like the KEF iQ30s.

Getting Deeper:
Now it was time to upgrade the rest of my system.  First it was a new cartridge: the Dynavector 10X5.  This is a good, dynamic high output moving-coil cartridge that works quite well with the Aries 1 turntable.  After that, it was time to bring out the best tubes I had for my Eico HF-60s.  Out went the Hitachi and Shuguangs, and in went my vintage Mullard tubes.  I also replaced the GEC CV4085s (EF86) with the very earliest and rare "long plate" versions that Mullard made.

These changes were proof positive that rolling in the right tubes can have a major impact on the sound.  Not only did the midrange become more relaxed, but the higher frequencies were even smoother than before.  The Dynavector 10X5 has always been a dynamic cartridge and partnered well with the B&W 805s.  Sure, the UREI 813As still hold sway in the explosive bass department, but for such a small speaker, the overall frequency response was much improved.

You Got to Equalize!
B&W also included a small bass equalizer with the 805s.  Since I didn't have another pair of Cardas interconnects on hand, I opted to use some budget Canare wire to make the connection between the Quicksilver preamplifier and bass equalizer.  From the output of this little unit, Cardas Cross wire was used.

The change was immediately apparent - this small speaker now growled like a much larger speaker.  Again, it was nothing like a big speaker with multiple drivers, but it sure helped with rock 'n' roll music.  The wooden character of the bass was gone and instead became really firm and punchy.  However there was a bit of detail loss, but for the types of music I listen to, I definitely preferred the improved bass response.  Now I will have to go ahead and buy a short run of Cardas interconnects.  However purists or listeners of lighter fare may prefer the speakers without the additional wiring and active equalization.  Try it both ways.

Speaker Cable Upgrade:
The Kimber 8PR/4PR is great budget wire, but I was curious to hear how my vintage Cardas Hexlink speaker cable would fare.  So back in went the binding post jumpers on the 805s, and on went the Cardas.  The change was quite immediate - the slightly bright, polite sound became much more relaxed.  The top-end treble also smoothed out, turning the monitor into one warm, full-bodied speaker.  Wow.   I would never expect such a major character change from a few feet of cable.

Details R Us
Bass Response:  Hey, this is a small speaker with a relatively tiny woofer.  Expecting subterranean bass suitable for hard rock or organ music is just plain wishful thinking.  If you like that kind of music, you either need a larger speaker or an additional subwoofer.  However, with the B&W bass equalizer installed, lower frequencies are served well enough that I don't miss my big studio monitors (too much).  The sound became really punchy with good detail.  It wasn't all boom either, but instead the bass became very tight and controlled.  Obviously some thinking went into the speaker crossover design and the additional needs of the equalizer.  Again, very dependent on system and musical tastes.

Midrange: Compared to the UREI 813As, which are ruthlessly neutral as befitting a real studio monitor, the 805s have a slightly recessed sound when using the Kimber wire.  This was tremendously reduced by the Cardas cable.  When the music gets really busy or the dynamics really start swinging, it's almost as if the speaker is slightly "holding back" as the big peaks swell up.  Once again, perhaps this is just the effect of a small speaker being asked to do the work of a larger one.

Detail was exemplary - fingers on strings, studio effects, and overdubs were just that more obvious than many other (more budget) speakers I've heard.  The level of available information was much higher than my old Magnepan 1.6QRs, but not quite in the Quad ESL-63 league.

Treble:  The 805 tweeter ranks up there with some of the better I've heard.  It's clean but not totally antiseptic.  It's also very detailed  Sure, it doesn't quite strike in the electrostatic speaker or the plasma tweeter level, but it's no slouch either.  Admittedly there is a slight bump in the highest of frequencies, so some system matching is paramount here.  For example, the wrong solid-state amplification or an aggressive moving-coil or DAC could play havoc with the system balance.  Be also sure to play with speaker wire, as my Kimber vs. Cardas experiment proved.

Other: Even at loud listening levels, the 805s never fall apart.  That is to say the speakers never sound ragged or uncontrolled.  Soundstaging placement, width and depth are also very good, letting instruments and voices sit naturally within the space of the recording.  There was some minor shrinkage - as to be expected - of image size compared to larger speakers.

Conclusion:
Speakers in the less than one-thousand dollar range are a hard nut to crack.  My advice in this range is to buy the best used model you can afford.  The B&W Matrix 805 is one such model.  I'm sure there are many others, but few in this price range can match the engineering, quality, and performance of these top level speakers.  I expect the 805s to have a long shelf-life in my current system.  Highly recommended.