A visit with the KAB EV-1 Record Cleaning Machine 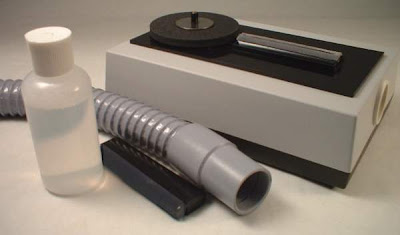 (Picture from KAB)
In the past year my vinyl collection has grown by leaps and bounds so I finally pulled the trigger and bought a $159 KAB EV-1 record cleaning machine. There is nothing worse than finding some vintage treasure that has been marred by dust n' grime of years gone by. I decided to buy one because a friend of mine has a Nitty Gritty Model 1.0 and I was amazed how well it cleaned up a couple of old Frank Sinatra records of mine. Compared to the Nitty Gritty the KAB EV-1 comes in at a cheaper price point by having the user supply their own vacuum power instead of an installed motor. However I will note that the EV-1 is fairly cheap looking with a simple plastic housing, hose connection and manual turning. But what matters in the end is if it gets the job done. So after a quick perusal of the instruction sheet I hooked it up to an upright vacuum cleaner that has a hose attachment and got ready to clean some records.

The first record I tried to clean is a Japanese pressing of 'Haircuit 100 - Pelican West' that is very crackly when being played. Upon visual inspection the vinyl 'looked' clean but there is a constant light pop-pop-pop over the music that is very intrusive. After putting the record on the KAB I applied the cleaning liquid as instructed with the supplied applicator brush. I then turned the record over, switched on the vacuum and made 5-6 slow drying passes over the record. I then repeated the process for the second side. In theory the liquid and collected dust will be removed via the thin slotted opening on the top of the machine. Replaying the record had a dramatic change. The low-level pops were gone and the record definitely stepped up a grade in quality. It could have been my imagination, but the album seemed to have more clarity too.

Obviously the KAB doesn't fix scratches, but I was curious to see how it fared on my beat up copy of 'The Kinks - Lola versus Powerman'. After treatment the record was still noisy in places but was much quieter overall. I would say it jumped from a VG- to a VG+. A cleaning of a recently purchased 'The Hollies - Bus Stop' dramatically improved this 1966 era vinyl. Gone were the constant ticks and pops caused by deeply entrenched dust particles. After cleaning several more records, I always found an improvement of varying levels dependent on actual physical quality of the record, not on the amount of dust. A certain amount of crackles and pops will always exist in this medium, but the record cleaner goes a long way to reducing them.

I'm now of the opinion that anyone who collects records should own a vacuum record cleaner of some kind. Though the KAB EV-1 requires manual operation and is light enough that it needs to be well anchored (it works fine sitting on carpeting), it gets the job done. Highly recommended for the record collector who would rather spend his money on more records than a fancy cleaner.