A Visit with the Mitsubishi DA-A10 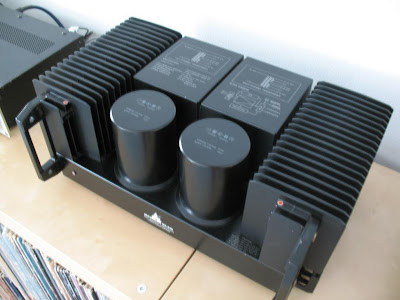 The Mitsubishi DA-A10 is a classic solid-state amplifier boasting some heavy industrial looks, dual mono power supply, input level controls and screw-type binding posts. Produced from the late 70s to the early 80s, the DA-A10 has a certain aesthetic appeal that I've always found desirable. Perhaps it is the McIntosh-like power transformers, black metalwork and the large can capacitors. Rated at 100WPC into 8 ohms and only 130WPC into 4 ohms, this amplifier isn't exactly a high-current powerhouse, but it certainly has more power than the other amplifiers in my second system setup.

With the recent addition of the Audio Research SP-7 preamplifier, I decided to buy another budget amplifier until I could score the right matching ARC amplifier. As soon as I saw the Mitsubishi amplifier on Audiogon, I pulled the trigger and had it in my sweaty paws within a few days. Unpacking the box revealed a heavy well-made amplifier that has a certain menace. Upon first seeing this beast, my mother-in-law even started asking questions about it. This is rare since my stereo hobby is mostly ignored by my in-laws.

So how does this amplifier sound? For the year, surprisingly good. Not to knock early solid-state, but the real golden era of SS amplification didn't really seem to take off until Krell, Levinson and Threshold started going. I won't even try to compare this amplifier to my Threshold S/500, but in my second system the Mitsubishi DA-A10 has a nice even-handed tone, great bass response and non-fatiguing treble. It's a great match with the Audio Research SP-7, getting more bass and dynamics out of my KEF Q60s than I ever imagined they could do. The sound is very smooth but not in old tubey way - just musical and engaging.

It runs really cool too with the heatsinks getting just barely warm at all. Of course these heatsinks are huge and I imagine there isn't much Class A power coming out of the output transistors.

Due to the age of this amplifier, I will at some point have to go through and replace some power supply capacitors. But right now I'm enjoying this little beast.