A Visit with the Yaqin MC-10T integrated amplifier 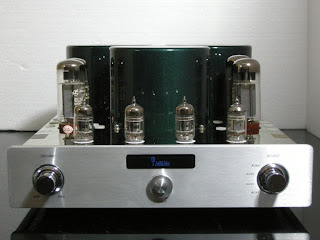 I have a love/hate relationship with tube amplifiers. Though I've rarely heard one that I haven't liked, they can also be troublesome little beasts. Much of that has to do with modern tube quality - the stuff coming out of China, Russia, and Slovak just doesn't compare to the days of yore when tube electronics was the only game in town. Back when I first got into tube audio, it was easy to buy a $100 Dynaco 70 that came with real Mullard EL34s. Now those tubes (and the amplifiers themselves) have become more and more expensive, making the hobby less and less fun. I'll admit that one of the reasons I recently jumped on the high-end solid-state bandwagon was to reduce my worries over quality tubes and the vintage amplifier high cost of entry.

But Yaqin - and other Asian tube amplifier makers - are starting to change my perception. Since I was impressed with the Yaqin MC-22B phono preamplifier, I decided to check out one of their amplifiers - the 50WPC Yaqin MC-10T integrated amplifier which can be had for under $500. For the price of a forty-year old used Dynaco 70, one can buy a brand-new unit with separate bias pots for each tube, a fine gold chrome finish and nice 5-way speaker jacks. It sounds almost too good to be true. Is it? Let's find out.

I bought a new Yaqin MC-10T from a stateside seller on Audiogon. Shipping was prompt and I soon had the heavy box in my hands. Packaging was excellent with heavy foam to protect the amplifier and plastic tubes to protect the vacuum tubes. The metalwork of the amplifier was very impressive - back in the 90s, I would have thought this was a $2000 unit. This particular amplifier uses a pair of EL34s and a pair of 12AT7s per side. Power supply rectification comes from solid-state diodes, though I would have ideally preferred dual 5AR4s. The power and output iron is your standard bog iron-core, covered by some large, but well-finished green cans. There is a 4-position selector switch for the line-level inputs (no phono preamplifier is included), a power switch and a volume control. 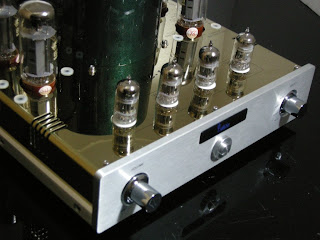 The manual, except for the technical section, is fairly worthless. It looks to have been translated from Chinese to English using an online translator, since the words used are unintentionally hilarious. But through the muddled English, I managed to figure out the suggest bias points.

Removing the Audio Research D-52B, I hooked the Yaqin up to give it a listen. I first checked the bias and found that it was off, even though it is supposedly set at the factory. I found the bias test points easy enough to use, but getting the allen wrench into the adjustment pots was difficult without burning your fingers against the closely positioned EL34 output tubes. After that was completed, I started to spin some CDs and records.

First up was Bob Dylan's Live 1975 - Volume 5 of the famed 'Bootleg Series'. This is one of my favorite live albums, even though it suffers from a minor 70s vibe. Through the Yaqin, I heard a very nice detailed sound. The crowd sounded live and energetic as they listened to Dylan play It's All Over Now, Baby Blue. For a CD of unreleased material, the sonics are pretty good.

Using the Audio Research SP-7 as a phono preamplifier, I then played OMD's Organisation, an album of melancholy synth music. Through the KEF iQ30 speakers, bass had a nice growl and the midrange was crystal clear with a nice and extended top-end. Next up was Icicle Works - The Small Price of a Bicycle. Though this album suffers from 80s solid-state production, the emotional impact of the music was evident as the powerful vocals soared straight into my heart.

Needless to say, I was very impressed with the Yaqin MC-10T. Though the bass lacked the ultimate control and deepness of the venerable Audio Research D-52B, the overall sonics were surprisingly refined and detailed. Soundstaging is deep and wide, and there is a coherence from top to bottom that doesn't suffer from any vintage tube amplifier sponginess. From memory alone, I would say the Yaqin bests my old modified Dynaco ST-70 and perhaps even my Dynaco Mark IIIs. At this price point, it's an amazing accomplishment and something that should keep American tube amplifier manufacturers awake at night. Very recommended, but with some caveats.

My issues with this amplifier just revolve around potential internal build quality issues and the possibility of troublesome Chinese tube sockets. In a future post, I'll delve deeper into the Yaqin MC-10T with some modifications. capacitor upgrades, and tube rolling. Stay tuned!