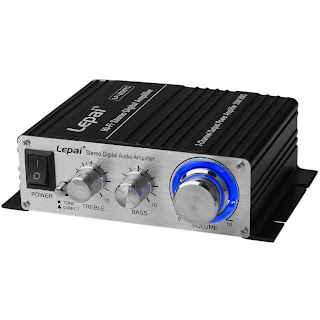 I'm in the midst of building a small home studio for recording synth and guitar.  My plan for monitoring was to use a pair of KEF Q350 speakers with a small amplifier.  With my past love of the Charlize and other Class T amplifiers, and a low budget, I decided to give the Lepai LP-2020TI, available from Parts Express, a try.  For $25 it is hard to go wrong.  If I didn't like it, no big hit to the pocket book.

This thing is tiny - like the size of two packs of cards.  It is also extremely light; helped by the 12V outboard power supply.  Build quality is just okay.  I'm not a big fan of the spring clip speaker wire connectors or the tone controls; which can thankfully be bypassed.  The light-up volume control is gimmicky too but no real major complaints given the silly low price.

In my garage system - replacing the venerable Adcom 545 - I was surprised how good CDs from the old Pioneer DVD player sounded.  There was a toe-tappin' excitement to the music with plenty of kick.  The Wharfedale Denton speakers are a good match with this amplifier, making more volume than I expected.  There was a nice speed to the sound too.  Over all I would give the slight nod of the Lepai over the Adcom, but we are talking a garage system so let's not get too carried away!

I originally wasn't thinking of plonking this little amp into my main system, but given the amount of free time I have due to being furloughed, I decided to give it a try.  Initial impressions were rather eye opening.  This is one very nice sounding amplifier.  But a few minutes of listening, even with my Dual CS5000 and Schiit Mani phono, I could hear a loss of detail and blurring compared to the Aleph J.  Bass of the Lepai was also a little rolled off and there was some solid-state grit and forwardness on top.  But to be fair, the Aleph cost in the neighborhood of $900 to build; a far cry from the dinner-for-one price of the Lepai.

Conclusions?  It's a good amp for cottages, garages small apartments, dorms, or where critical listening is not of upmost importance.  I could easily imagine a system with a Rega RP1, Schiit Mani, the Lepai, and your favorite budget mini-monitors.  Such a stereo would best a lot of ones that I've heard (or even owned!).