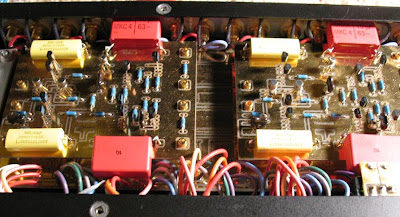 My beloved Threshold FET-10/HL linestage is getting a little long in the tooth. The few electrolytics need replacement and the couplers are due for an upgrade as I'm no fan of Mylar capacitors.

I first tackled the Power Supply, replacing the original four diodes with UF4007s. It's hard to find quality axial capacitors and the outboard power supply is too small for fitting in radial capacitors. With that in mind, I ended up replacing the 2200uF/25V electrolytics with 3300uF/35V Nichicon FGs.

Next up is the actual signal unit. 4.7uF power supply bypass capacitors were replaced with Elna Silmics. Inside, it's a tight fit height wise with the input and output coupler capacitors. So I used 1.0uF Rel-Cap PPMFs on the input and 10.0uF Wima Polycarbonates on the output section. This is a much improved upgrade over the original input film and output metallized Mylar capacitors.

How does it sound? Polycarbonate have always been some of my favorite 'sleeper' capacitors and once again they proved their mettle. They are much superior to the original Ero Mylar capacitors with a cleaner, less fuzzy soundstage. There seems to be more minute detail too. The combination of the new parts makes for a much better preamp and a brings this old girl back up to world class level again. 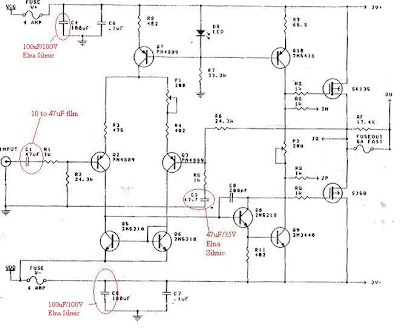 This was an easy upgrade - on both boards, replace the 100uF/100V and 47uF power supply electrolytics. The 47uF electrolytic input capacitor was replaced by a 10uF film unit. You can use anything from 10uF to 47uF here. Due to the size of the film capacitors, I bypassed the circuit board capacitors with wire and installed the new units inline on the leads from the RCA jacks.

The end result was an amplifier that sounded much more detailed and immediate. Gone was the treble roll off and plummy bass. The big 47uf electrolytic input definitely added some major coloration to the sound as now it sound much more neutral. Though not in league with my big Threshold S/500, the B&K is now one heck of an amp for the money.

A Visit with the B&K ST-140 amplifier

My Threshold S/500 amplifier is in need of a rebuild. With that in mind, I decided to buy a interim amplifier to drive my Magnepan speakers. I wanted something cheap as this was also going to be an expendable unit to practice my solid state upgrade skills on. After examining several amplifiers on Audiogon, I selected the budget-priced B&K ST-140 since it is renowned for a smooth tube-like sound. It is also a simple design that would lend itself to potential modifications and allow an easy upgrade path.

As far as I can tell, there are three iterations of the B&K ST-140. The first one, from the early 80s, used a iron core transformer and each channel had a pair of Mosfets to make 70Ws. The second version has a toroidal transformer, bumped up power supply voltage to drive the pair of Mosfets to 105Ws of power. With the increased voltage and power came a decrease in handling lower impedance loads. After all, there is only so much you can ask from a pair of output devices. Both of these versions have gold front panel lettering and rear mounted heatsinks. The final version had blue and red lettering and can handle lower impedance loads with four output Mosfets per channel. 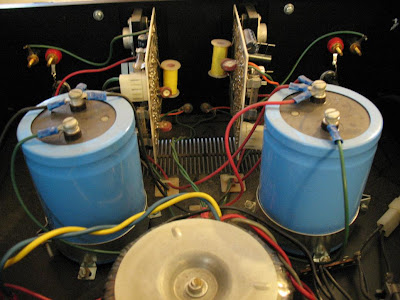 The ST-140 I purchased comes from the second generation. After delivery, I opened up the box and was greeted with a larger than expected amplifier. Though a lightweight compared to the Threshold S/500, it still has a substantial footprint. However, cracking open the case revealed mostly empty space! I suppose some of this is marketing as it is easier to sell an amplifier that looks big and burly compared to some lightweight case size.

First stop was my second system. Out came the Dynaco ST-80 amplifier and in went the B&K. The power difference between the two was immediately apparent as the bass on the KEF Q60s was deeper and more energetic. Spinning a few CDs and records revealed a warm amplifier with plenty of reserve. Treble seemed a touch rolled off, but was plenty smooth. This is obviously someone's idea of how a tube amplifier sounds and perhaps they are right on some level. But tube amps can run the gamut of "soft n' slow" to "rip your ears off" so I'll leave that comparison behind and move on to the main system.

With much back wrenching, I moved the Threshold S/500 off of the rack and installed the B&K ST-140 in its place. The ST-140 is a definite lightweight with a measly two output devices per channel. In comparison, the S/500 has twenty(!!) and can drive just about any insane load imaginable with plenty of reserve.

Spinning up some Blue Nile - "Hats" on vinyl gave the B&K a chance to show its stuff. The sound was very warm and inviting. This is an amplifier made for the music lover. Treble extension was lower than the S/500, but the overall effect was very pleasing. With the ST-140 bass was wooly and underdamped, but fun. Jackson Browne - "Running on Empty" revealed a midrange, that in comparison, was less detailed but was very pleasant. The overall sound was a little darker and more compressed than the Threshold, but it was so easy to sit back and spin records, allowing one's emotions to get carried away with the music. The experience was like listening to a great FM radio station!

The B&K ST-140 highlights the classic conundrum with high end audiophile gear - more resolution has the side-effect of revealing more flaws, lessening the appreciation of the music unless it is well recorded. It also challenges your front end more, shining a spotlight on cartridge, turntable and other flaws. An amplifier like the ST-140 diminishes flaws, having a darker, more "Yin" sound. It is pleasant, but in the end I felt like I was missing something.

Since this is an old amplifier, I still have some capacitor replacements in mind. It will be interesting to see how the character of the sound changes. Stay tuned!