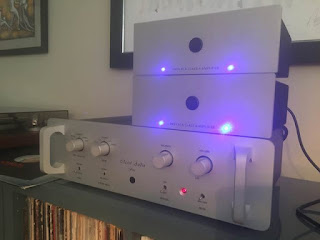 The ACA amplifier is a Nelson Pass design created to teach basic concepts about amplifier design. It is low-powered (6-8Ws per channel), run in pure Class A, capacitor coupled on the output, and is even single-ended.

There is a long, and very detailed article from Mr. Pass which, to put it bluntly, far surpasses my more vacuum-tube orientated knowledge. I see a single jfet driving a current sourced Mosfet, capacitor coupled on the input and the output, along with some modest feedback.  Anyone who wants to know the nitty-gritty of this amplifier should take a gander at the link for more information. For those who are a glutton for punishment here is the schematic: 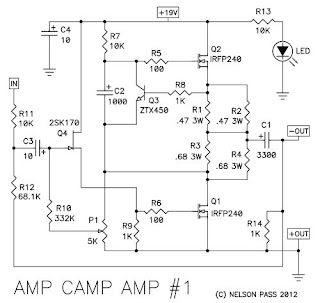 My own requirements are modest wattage and an attempt to capture some of the magic that I hear with single-ended tube amps. The ACA amplifier can also be bridged, via an XLR input, to double the power, something I will need with my 86dB efficient Wharfedale speakers that are in a moderately sized listening room.  I won't need gobs of power for reasonable listening levels. Since my Classe Five preamp has XLR outputs, I will be going this route, building two stereo amps to use as bridged monoblocks.

Here you can see the passive parts and the circuit boards. It's best to populate the small parts first - the resistors, followed by the caps and solid-state devices. 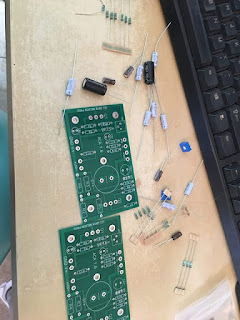 Once the circuit boards were stuffed it was time to start assembling the amplifier chassis for PCB fitment, along with RCAs, XLR, switches, and binding posts. 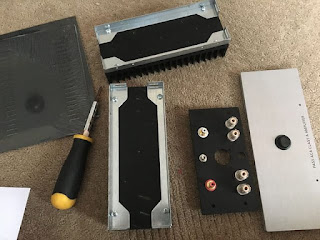 Here you can see the stuffed circuit boards attached to the heatsink. The Mosfet outputs are mounted too. 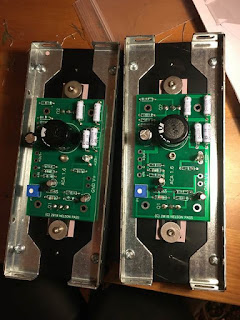 And I did some more work on the back panel, which has all of the connections. 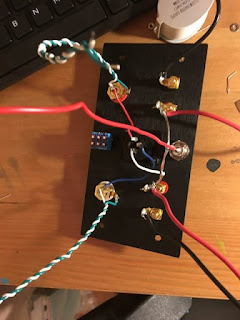 Powering up the amp for the first time is always exciting. But I ran into a snafu - the power indicator LEDs would begin to flicker. Measuring the voltage from the power supply brick, I could see it was fluctuating from 24VDC (good) down to 5VDC (bad). A check on the DIY Audio forum indicated this is the lap top power supply going in protection mode if there is short.

To troubleshoot I removed a power supply lead from the boards, one at a time.  Once I found the board with the problem, I disconnected it from the heatsink. And then the problem went away. This was a clue that there was something wrong with this board.  I ended up having a cold solder joint that was easily fixed.  I guess those years of point-top-point wiring has come back to bite me.

Here I am biasing the output mosfets, each side set to 12V: 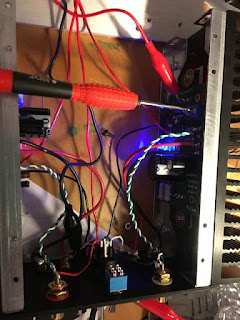 And then once that was done, I was able to - FINALLY! - give it a listen: 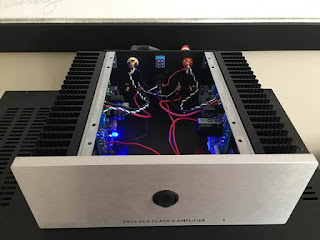 Initial Impressions: lower gain than the old workhorse Adcom 545. Instead of 9-10 o'clock on the dial, I have to turn up the volume to 1 o'clock to get the same sound levels. The ACA is very smooth, a little lacking in bottom end thump but still very articulated. Jazz - like Chet Baker's album Broken Wing - sounds fantastic, while harder rock albums seem to lack some of the macro dynamics. Of course we are only talking 6-8Ws here with 86dB Wharfedale speakers (6-ohm impedance) so not an optimal match. I wouldn't say the ACA sounds like a tube amp - some similarities: with a non-fatiguing top-end - but it also doesn't sound like your stereotypical SS amp either. Obviously some break-in may also be needed.

Luckily the second amp was a lot easier to build, taking almost half the time and with no problems to troubleshoot. 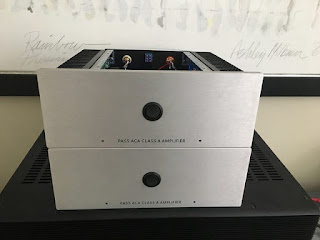 In this picture I still have to install the front power indicator LEDs and the top and bottom part of the chassis, but I did manage to listen to them bridged, using the XLR output from my Classe Five amplifier. Very impressive.  Neil Young - Live the Cellar Door sounds good on just about any stereo I've owned, but this may the best I've heard it, even compared to the days when I had an all tube chain and big UREI 813A speakers. Lots of micro dynamics, very realistic, and engaging. The amps sound way more powerful than the 12-16Ws it is making.

Some further listening - The Bee Gees - Trafalgar - revealed a slight metallic sheen that seemed to fade with further break in. Very clean but not lean. Detail, studio reverb, etc was all there. Frequency response was very even, no warts, and less "lossy" than some of the lesser tube amps I've owned. Single ended Mosfet is interesting, to say the least, not quite tube-y, nor is it "classic" solid-state (whatever that means). Just different, even more so than Class T (Tritpath) designs I've built. The old, and much need of a recap, Adcom 545, when put back in the system, sounded more indistinct, gray, and uninvolving, though it does have superior deep bass reproduction (and better damping and more power).

Gain is still a bit lower than I would like. Deep bass isn't as prominent as other amps, but again, 6-ohm and fairly inefficient Wharfedale speakers with 5" woofers here.


Listening Update: After a few weeks in the system, I'm quite impressed.  Very neutral with a touch of sweetness.  Some of the best depth I've heard out of a solid-state amplifier, along with very good detail retrieval.  Some of the better tube amps I've build or owned are slightly better at separating voices and instruments, but the ACA amps do a very passable job, just not quite as much "breath" to the performers.  Whether the tube amps are revealing realism or a coloration is an interesting question.  Considering the capacitor coupling, low output - even bridged, and the low damping factor the ACAs still managed to control the Wharfedale Denton speakers quite well, with just some minor loss of bass control.  These amplifiers just make me want to build an Aleph J amplifier that much more - stay tuned!