A Visit with the Yaqin MS-22B phono preamplifier 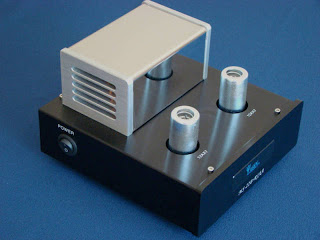 I first got into audio, way back in the mists of time, because of vacuum tubes. Thanks to hearing a friend's McIntosh MC240 and an old Dynaco PAS (both extensively modified), I heard music in such a way that forever changed the way I look at stereo equipment. Lately I've been dabbling in solid-state; trying to wring out whatever musicality I could from these silicon devices. And to a certain degree, really good SS gear can capture much of the magic of vacuum tube gear without the worry of tube life. However, vacuum tubes have a sheer musicality that is hard to replicate with solid-state. You can call it warmth, dimensionality, or liveliness - but there is something special about valves.

I've heard a number of positive reviews and experiences with the Yaqin MS-22B. This is a simple two-tube phonostage that uses a solid-state buffer. From the pictures, it looked impossibly well-made for only $179 shipped. I was curious enough to give this budget unit a chance, so I ordered one via Ebay. To my surprise, I had it in my hands in a week.

Pulling the Yaqin MS-22B out of the box, I was surprised by the heft. The metalwork also appears to be of a high quality, having lettering for the tube types, power switch and the RCA jacks. The stock tubes are Shuguang 12AX7Bs - known to be a little dark in their presentation - and are covered with twist-on metal shields. The input and output jacks, plus the ground lug are also very nice. The power transformer is mounted on top and is covered with a metal box that looks like a small toaster oven. I've built my own DIY phono preamplifiers, and I know from experience that building something like this from scratch would cost more than the Yaqin asking price.

Okay, how does it sound? Since I only have one turntable that uses a MM cartridge, I could only check out the Yaqin in my second system (listed below). Placing the 22-B on top of my Audio Research SP-7, I soon had the cables switched around. I then turned on the Yaqin, which emitted a nice blue glow through the front logo. Note - there was a nice thunk when powered on, so keep your volume control down when turning the 22-B on.

The first record on was Pete Townshend's classic Empty Glass. Through the Yaqin, the music had a nice bouncy rhythm, a surprisingly extended top-end (considering the Shuguang 12AX7Bs), deep bass, and a engaging character that made the record a joy to hear. I then went and cooked some dinner, leaving the Shuguang on to warm up further. After eating, my fellow audiophile friend came over. We listened to Frank Sinatra's Strangers in the Night and Neil Young's On the Beach, and concluded that the Yaqin MS-22B is one hell of a deal. At least in the confines of this budget system, we heard an extra dimensionality that the Audio Research did not have. The ARC SP-7 is definitely more neutral, detailed, and 'high-end', but the Yaqin was more engaging, musical, and just plain fun. At the price it is being sold, it is also a great bargain. For a budget system - highly recommended, but with some minor caveats.

What are my issues with this phono preamplifier? I did notice a bit of hum at higher volume settings, but this shouldn't be an issue unless you are running high-efficiency speakers or a lower output cartridge. I also found the bass to be a little plummy - perhaps this could be corrected with some tube rolling. 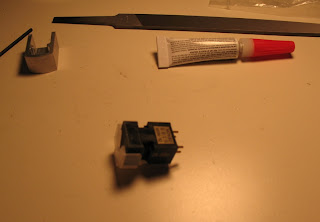 The Denon DL-103 is a popular low-output moving-coil phono cartridge that has seen a recent renaissance in the audiophile world. It's always been one heck of an audio bargain, so of course once the tweakers got a hold of it, things were bound to get a little crazy.

I bought the more expensive DL-103R, which features high-purity copper coils and a lower output impedance, which makes it perfect for my Audio Sector Phono Stage. I was really impressed by the sound of the 103R. but read numerous online suggestions for improving the sound. So with much trepidation, I went and bought an aftermarket aluminum body from an Ebay seller called sound-improvements.

Removing the original plastic body from the Denon takes a steady, steady hand. I really didn't want to do this operation, but it actually turned out better than I expected. While cutting out the glue in the corners, remember to keep the stylus protector on, which is the only way to protect the cantilever. Luckily someone posted a video on YouTube showing you how to take off the body:

When the body is off, you will end up with something that looks like this: 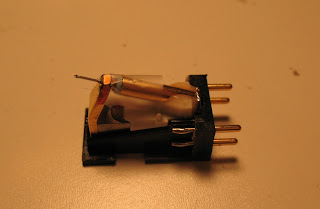 In order to get the nude Denon DL-103R to fit into the aluminum body, I had to round off the edges of the front plastic with a file. Then it was a matter of a dab of glue in the inside of the aluminum body before I gently slid the cartridge inside. I used the thin blade of my hobby razor to get it snugged in place. 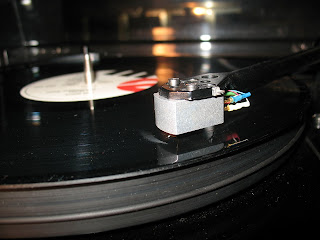 After remounting, adjusting and resetting the balance (this cart is now HEAVY), I could finally give my Franken-cartridge a listen. Spinning some familiar records, I was impressed by the improved treble response. It now sounds more clear, less splashy, and with more apparent extension. The overall character of the Denon 'house sound' hasn't really changed, but it does now have a more 'proper' audiophile sound, removing much of the (minor) "rough 'n' ready" character of the old cartridge. These aren't really major changes, but just an increased level of finesse. Recommended, but only for those with nerves of steel.