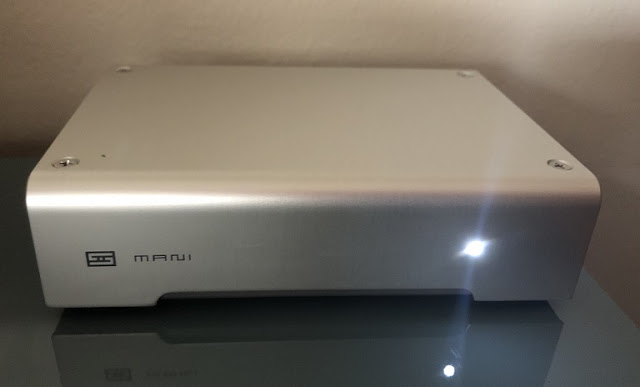 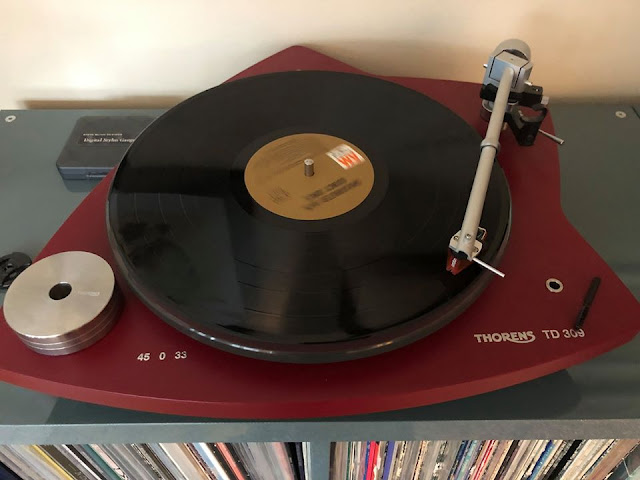 I've been making slow but steady steps upgrading my current family shared stereo.  I've gone from decidedly mid-fi gear to something that I consider a step up from the usual bog equipment.  The Aleph J, for example, continues to amaze me as does the clarity of the Classe 5 preamplifier.  The Wharefedale Denton speakers have also been a real treat, easily besting anything I've heard in the sub-$1000 (USD) price range.  However there has been one niggling point that has been pulling back this stereo from being truly great.  I am, of course, talking about the turntable.  The Dual CS5000 has been in service for me for almost a decade.  It does a competent job of playing vinyl, my preferred medium, but I knew it was time for an upgrade.

The question was what to get?  In the past few years the turntable market has exploded with varying makes and models across all budget ranges.  Given my under $2000 (USD) price range I had a few options including the discontinued (and marked down) Rega P8, the Rega RP6, or the tried and true VPI Scountmaster (used or B-stock).  I hemmed and hawed, thinking of my experiences with solid plinth turntable, and in the case of the VPI, the JMW unipivot tonearm.  I wanted something a little different, a little more old school, with a suspension. I won't go into the ancient debate between suspended and solid plinths, each falling in and out of favor as the years have gone by.  I will instead just go with what I heard with the best systems.

Searching through Audiogon listing and doing a lot of review reading, I came to the Thorens TD 309 Tri-Balance turntable.  The reviews, even with the included and very budget Audio Technica AT95S, were mostly positive.  It seemed that any negative points could be ameliorated with a better cartridge.  I was also taken by the engineering with a speaker manufacturer to reduce motor and environmental vibration.  The speed controlled DC motor, the available colors, and the Japanese quality bearings was a bonus.  So I purchased one - used - that came with an Ortofon 2M Bronze cartridge.

Once I received the turntable via FedEx it took me a solid 90 minutes to set up.  Some of this involved running off to the grocery store to buy some batteries for my digital style gauge.  At first glance it looks to be a well-made record player.  I was especially impressed by the methods used to decouple the platter from the motor. 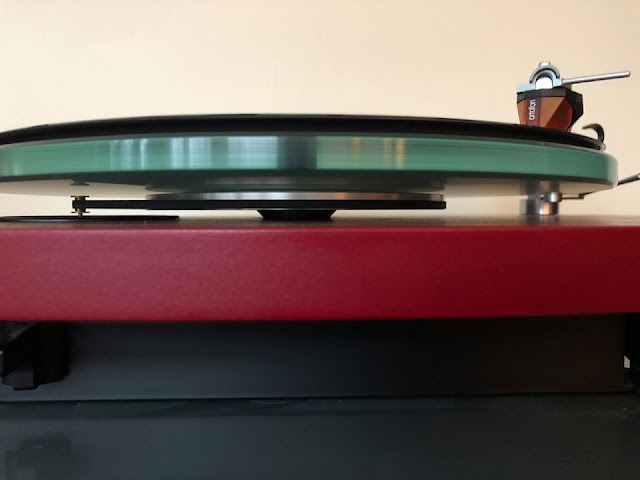 Installation of the 2M Bronze wasn't exactly a breeze.  It required the removal of the headshell and some fiddling of the screws that mount directly to the body of the cartridge.  Using the Thorens supplied protractor I was able to get the alignment zeroed in pretty quickly.  After adjusting the counterweight I was finally able to listen to some records.

Initial Impressions: I can immediately tell there is a difference. With the Thorens there is a lot of weight to the bass.  Music plays with a lot more ease and less grunge than the old Dual.  Which is to say there is a lot less mechanical noise with the new turntable.  This in turn reveals more detail, makes the notes "breathe" easier, and also increases depth and width of the soundstage; allowing the listener to "hear" deeper into the recording.  I'm reminded of the VPI Aries 1 in this regard, and, given the difference between the platter weight, a surprise.  I suppose a well-tuned suspension can replicate the solidity of a table with a solid plinth and heavy platter.

After a few hours of enjoyment and some tweaking of the arm setup, it was time to sit down and do some serious listening. 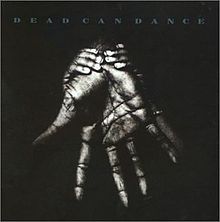 Dead Can Dance - Into the Labyrinth is a well-recorded gem.  The Thorens/Ortofon combination reveals quite a bit more detail, a pulsing bass, and a soundstage that had width and depth.  The music positively soared, leaving, in comparison, the old Dual sounding like an AM radio.  Voices were especially good, with excellent body and realism.  Congestion was nil, each instrument sitting in its own space without confusion or muddiness.

Background noise, on this original 1993 UK pressing, was suppressed with any ticks and pops riding on a separate plane of the music. 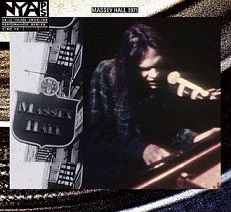 Neil Young's live acoustic album - Massey Hall 1971 - is a well-recorded album.  A good system should sound like live music, revealing not only excellent timbre but the very hall itself.  The Thorens TD 309 does a very good job here.  If I close my eyes it does feel and sound like I'm really there, enjoying the concert.  The only break in the spell is the lack of chatter behind me, and of course no cigarette smoke.

The reverberation or natural slap of the hall walls can be heard.  Impressive with much more life than any digital rig I've ever heard. 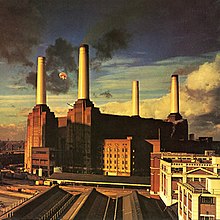 Animals is my favorite Pink Floyd album so I was looking forward to hear what the Thorens to do.  Instead of a big vibrant soundscape, I began to hear a lot of compression (at higher levels).  Once I turned the volume down, the compression disappeared.  As an experiment I went upstairs and pulled out my backup amplifier, the venerable Adcom 545, which has roughly 4x the power of the Aleph J.

Long story short, it turned out that the Thorens had such an extended bottom end that it was making my low-powered single-ended Aleph J clip!  Such is the life of trying to live with so little power with a pair of 86dB speakers.  This pointed to a future speaker upgrade. 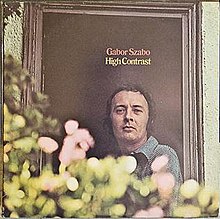 With the Aleph J back in the system, I went for something a little less bombastic.  Gabor Szabo was a Hungarian guitarist with a delicate touch.  He died too young but luckily left a large body of beautiful work.  The album High Contrast works well with the Thorens: with speedy lead note changes, the shifting dynamic drum work and the perfect rhythm guitar genius of Bobby Womack..  The attack of the guitar is just about right, never edgy, revealing the intricacies and subtle methods of Szabo.  The imaging, given the multi-miked nature of the recording, is also very good with the lead guitar slightly forward of the rest of the instruments.


As you can tell I was quite taken by the Thorens, at least once I understood that it had such a wider dynamic range than the Dual CS5000.  This lower, more refined bass response caused all sort of havoc with my amplifier/speaker pairing, leading me to the decision that a more efficient pair of speakers is in my future.

As regards to overall sound quality:

Bass: Dynamic, at least within the limitations of the small Wharfedale speakers.  The midbass frequencies are special here with lovely timbre and shades that I've heard only on the better turntables.  It's the sort of bass that I prefer over digital, which can plod and sound artificial.

Midrange: Subtle, expansive and revealing.  Different recordings, well, sound different.  So there's not a lot of coloration or analog "dither" (noise) over the music.  Once again it's not a sterile presentation, which can occur with lower-end digital, but shines a light on the notes in an engrossing way.  It's also easy to shift attention to another instrument.  Organic is a word that comes to mind, but not overly warm like some noisier turntables.

Treble: Smooth, provided the cartridge is setup correctly.  An aggressive recording is not going to sound rolled off, but something well-balanced won't sound dark either.  There is a nice sparkle and shimmer too.

Other: This sort of tight analog foundation seems to be rare but adds to the rhythmic toe-tapping experience of music.  More than once I found my foot moving with the beat.  The turntable plays very quietly, doing an excellent disappearing act in minimizing coloration.  The Ortofon 2M Bronze is a great tracker too, playing the last songs without any audible IGD.

Conclusion: For the money, the Thorens is a nice alternative in a very competitive price range.  Even if I had bought a new unit I still would have been perfectly happy with the choice.  Given the quality of the tonearm, the engineering of the suspension, the DC motor, the platter thickness, and the modern looks, the TD 309 gets a solid recommendation.  As does the 2M Bronze, though a Black stylus may be in my future.