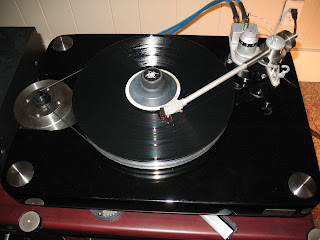 Introduction:
I've been having turntable envy for years.  While I soldiered on with my old VPI HW19 Mark III, my good friend had the much better Mark IV version of the same table.  This included a much thicker platter, plinth, and the well-regarded SME309 tonearm.  These tables are fairly rare, only popping up on Audiogon or Ebay every once in awhile.  I thought of upgrading my own table with a better tonearm and slowly piece together the parts to bring it up to Mark IV status.  However, the parts for these old models are getting harder to find, and frankly the dollar amount made me skeptical of that direction.

Obviously VPI - and other manufacturers - are still making turntables, but most of them lacked an option that I thought was of utmost importance: an active suspension.  The original VPI HW19 turntables were suspended designs, using heavy duty springs in the corners to isolate the plinth, tonearm, and platter from the surrounding environment.  This is hardly a new idea - it has been done with countless turntables like the classic AR, Thorens, and Linn.  On the other hand, I've always associated solid plinth (or non-suspended) turntables with the dreck that came out in the 1970s and 1980s - notably the cheaper Japanese turntables that sprouted up everywhere and gave some of the bad vinyl experience that made consumers flee to the digital world.

So where does the Aries 1 fit into all of this?  Though it is non-suspended, it was also VPI's first foray into this type of design.  It was also supposed to be a cheaper alternative to the TNT, their top of the line model.  So basically the Aries sports the TNT's platter but instead of a spring suspension, it uses a solid (and very thick) plinth.  The tonearm is also an upgrade over the normal Scout of Scoutmaster, using the JMW10.5 instead.  For some reason, not many Aries seem to be sold.  The sit in a sort of middle of the road position in the VPI lineup - more expensive than their entry-level models, but still expensive enough that the alternatives: the HRX, The Classics, or the TNTs are almost direct competitors.  That means you don't see too many Aries around, and the 1 seems to be even rarer.

Based on the reviews, Arthur Salvatore's recommendation, and the quality of the platter and bearings, the Aries 1 has always been on my list of possible upgrades.  Though it lacked a true suspension, I thought that perhaps with enough mass loading, even having the "limitations" of a solid plinth could be overcome.  When a conversation with the owner of local record/stereo store brought up the Aries 1, I knew this was one table I had to try and snag.  He was willing to sell it for a lower price than I was seeing on Audiogon, and it would also mean no shipping.  That means a lot when buying something so fragile.

It only took one glance at the beautiful piano black plinth, the super thick 25lb TNT platter, and the well-made JMW tonearm to know that I would be willing to put a sizable dent into my credit card.  So off I went, heading home with a lovely turntable and a bite of debt.

The Design
As mentioned before, the Aries 1 table sports a heavy-duty platter composed of aluminum and acrylic, weighing in at a heft 25pds.  Supposedly - and I have no direct experience with this - this earliest version is superior to the later lighter frosted acrylics platters.  Beneath this is the thick solid plinth made of MDF and painted with a glossy black.  Like the Scout and Scoutmaster, the motor is not bolted to the plinth. Instead it sits inside a carve out with no direct connection to the turntable except for the belt.  The motor chassis itself is very, very heavy and does not move or rock back and forth when turned on.  The tonearm on this particular version is the JMW 10.5i which has Nordost wiring.  It's a unipivot design which essentially has the entire arm resting on a single minute point.  When moving the tonearm over the records, this can lead to some unsettling rocking side-to-side motion.  However after prolonged use, one realizes how sturdy the whole contraption feels. 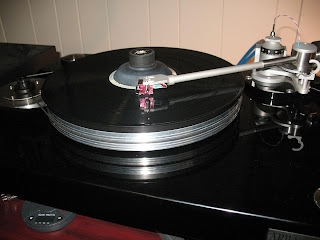 Initial Impressions:
Since I only had a Denon DL-110 on hand, that was the first cartridge I plugged in.  With some additional headshell weight - an additional metal tab provided with the cartridge - I soon had the tonearm dialed in.  The supplied VPI jig certainly helped, along with my digital pressure gauge.  More details for setup here.  One thing I really liked was the tonearm connection "junction" box that allows interconnects to be plugged directly into the table.  This is certainly better, at least if you enjoy swapping cables around, than dealing with one set of wire that could possibly be too short.

I threw on a copy of Neil Young - Live at Massey Hall (Pallas) which is a high quality recording.  I was struck by the sheer quietness of the Aries turntable.  The normal background rumble and wash that I unconsciously filtered out with my other tables was suddenly gone.  The effect reminds me, oddly enough, of the CD!  However, the Aries is not lacking in detail, nor are subtle musical cues missing.  Instead the separation of motor, the heavy plinth and platter, along with the tonearm has given this turntable a foundation that allows the music to spring from total blackness.  Simply amazing.

Not only is the background incredibly quiet, but the dynamic and bass control also reminds me of the better parts of digital.  For example, listening to The Police - Synchronicity (Japanese) and there was terrific low frequency control and detail that gave a bouncy excitement to the music.  The dynamic sweeps, from softest to loudest, seem almost infinite in scale.  This is not your father's turntable.

Upgrading the Cartridge:
The Denon DL-110 phono cartridge is no slouch and is certainly one helluva a bargain at $139.  Nonetheless, I felt the urge to upgrade.  A better match for the tonearm was the Dynavector 10X5, a cartridge that I had run before with much success.  Thanks to a friend, I was able to procure one with low hours at a price lower than new.  Once again installation was a breeze.

The Dynavector 10X5 brought further refinement to the sound: more detail, deeper bass, a controlled treble, and a large sense of scale.  The sonic attributes already mentioned: black background and dynamic scale were only improved even more so.  After listening to several records and doing some dialing in with cable swaps, speaker positioning, and tonearm adjustments, I came up with following impressions:

Sonic Attributes:
Bass: This is one of the major strong points of this turntable.  It can reach Stygian depths, the likes that are normally the province of the digitial medium.  Along with this extraordinary depth comes control and slam.  This makes rhythmic music gel together in a foot-tapping way, but also adds to the foundation of the performance.  This level of bass performance is simply wonderful.

Midrange :Like the bass, the keyword here is control.  The lack of muddiness and the washed out effect that lower turntables generate, leads to clarity.  Minute details are more apparent.  The end result is a very refined sound, but not one that is overtly so.  That is to say the turntable serves the music embedded in the vinyl, not the other way around.  This allows the character of the recording to come through with delicacy, aggression, or whatever was intended by the artist.  This bloom and body is something that the digital medium has a hard time with, and lesser turntables can only catch a glimpse of.

Treble: Refined is the first word that comes to mind.  Like the midrange, the lack of fuzziness brings plenty of detail to the table.  A poor recording will sound harsh, while a good recording will bring out the delicate reverb of the hall or the sweeping shimmer of the cymbal.  There is no glossed over warmth here, or masking effects from roll-off.

Other: If I could fault the Aries in any way, it would be the slight mechanical reproduction of the music.  You see the lack of muddiness leads to an extremely open sound that honestly reminds me of digital in many ways.  Now don't get me wrong, this is no Magnavox CD player, but an extremely musical machine that is also ruthlessly revealing.  This lack of uber-analog warmth my turn off some listeners used to a richer euphonic sound.  Personally I prefer gear that speaks to what the recording has to offer, not to give a pleasant coloration.

Conclusion:
The VPI Aries 1 has been a major upgrade.  Not only has this turntable blown away my expectations of solid versus suspended plinths, it has also brought my entire stereo up another notch in fidelity.  It's quite common to get carried away with a new piece of gear, but lengthy listening has proved that the Aries is no flash in the pan.  In the wide world of turntables, I'm sure *better sonics could be found, but expect to pay for it.  Highly recommended.

* I see that the VPI Aries 3 has an asking price of $6000USD.  I'm not sure if this would be a good bargain, so if you are interested in this particular model, be sure to shop used.  An Aries that has been well cared for will be a better deal than many new turntables in the same price range.