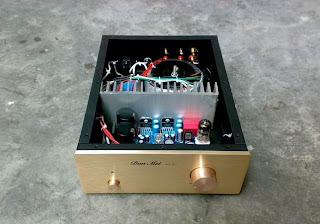 The Chinese audio scene is certainly interesting, with quite a number of products flooding the Ebay market.  I was initially skeptical of this gear, but the experience I had with the Yaqin MS-22B piqued my interest further, leading me to buy a Yaqin MC-10T.  So far, I've found the metalwork to be quiet good, and only find fault with some of the 'interesting' design decisions and parts quality - which I often suspect of being counterfeit.

I think the Sino tube gear market could really take off, but only if they started designing gear that was not only sensibly priced, but much more palatable to the worldwide market.  They seem to have a real love for integrated amplifiers, including ones with onboard DACs, but often lacking phono stages.  I would really prefer to see basic power amps, linestages, full-function preamps including phono circuitry, and tubed DACs - all using standard tubes.  Some of the products strike close to this ideal, but many of them are strange beasts, which could possibly turn off some Western buyers. 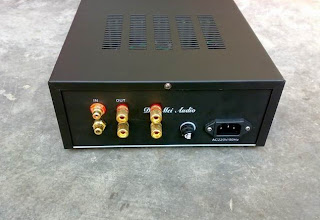 Okay then, so what exactly is the Dun Mei?  It's essentially a basic amplifier with a pair of RCAs for input, a cheap volume pot, and a 6N11/6DJ8/6922 cathode follower (aka tube buffer) driving a LM3886 chip amplifier.  Capable of 50WPC into 8-ohms, and only 68WPC into 4-ohm, this little unit won't exactly win any horsepower wars.  But in the real world there is always room for such minimal wattage - second or cottage systems, dorm rooms, and running larger desktop stereos. 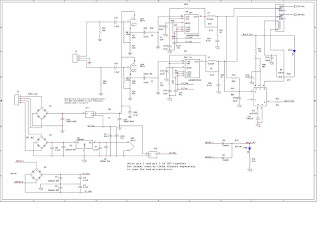 Build quality is so-so.  The front panel is certainly nice looking, including a hefty volume knob and LED power light.  But the metalwork, and especially the back panel, is a little er, underwhelming.  It looks like a generic case that has been used across many different lines - capable of being a preamp, DAC, or amp.  The speaker jacks through the back lettering doesn't exactly inspire confidence either.  The interior work is a little better with some half-decent wiring layout, a blue PCB with various parts, a toroidal power transformer, and even an AC filter.  However, I wasn't too keen on the generic clear speaker wire, the use of hot glue, or the RCA jacks that were installed incorrectly, with red being left and white being right.

I admit bought this unit on a whim - a chance to check out yet another budget piece from China, and as an opportunity to hear a LM3886 chip amplifier.  The results were surprising. 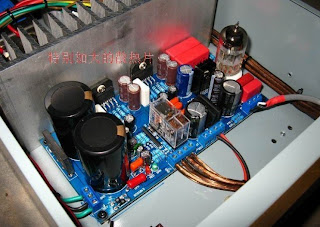 Initial listening was done on my second system, replacing my now defunct Audio Research D-52B.  First impressions showed an amplifier with relatively light bass weight, a fairly decent midrange, and a bit of a glarey top-end.  Not great, but again, not bad.  But wait, dear listeners, the stock Chinese 6N11 tube is easily replaceable with a better 6DJ8, 6922, or 6N23P.  Since I have a few of these in my stash, I first plucked out a Russian 6N23P - a budget favorite.  The sound definitely took a turn for the better - a little warmer, but the top-end still had a tizziness that was a little annoying.  Next up was an inexpensive Matsushita 6DJ8 - basically a Japanese copy of a Mullard tube.  The rest of my listening notes was through this tube. 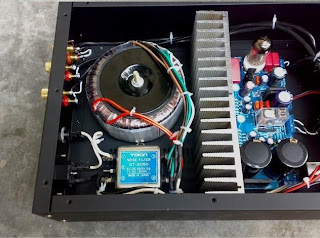 As stated before, this amplifier lacks the ultimate bass extension - perhaps I'm asking too much out of only 50Ws of power, but even the Audio Research D-52B had more weight and punch.  But the midrange is clear, erring on the leaner side of the spectrum.  This is, of course, somewhat dependent on tube selection, but so far, I wouldn't call this amp "tubey" sounding.  The top-end, though lacking the shimmer and airiness of the best I've heard, is fairly good, though perhaps a touch sterile.  I also wouldn't call this amplifier hyper-detailed.  It also doesn't envelope you with a huge 3-D soundstage or have massive depth, but it isn't flat like a pancake either.  Again, I haven't bought a vintage Amperex 6DJ8 to use here since I don't think many buyers of this budget amplifier will be using expensive NOS tubes with the Dun Mei, but perhaps a different tube would yield better results.

Okay, I'm nitpicking, comparing a very inexpensive power amplifier to some heavy-hitters, but that's life in the audiophile world.  What this amplifier does excel at is being a quiet, fairly neutral reproducer of music.  It would be great starter amp for any beginner audiophile, or anyone who needs more than basic T-amp power in a small(ish) package.  My Dun Mei ended up in my home studio, driving a pair of budget Pioneer BS-21 speakers.  The volume control is perfect for dialing in sound levels while playing, track playback, or mastering.  The sound here is neutral enough for me to hear the effects of adding reverb or effects to the final sound.